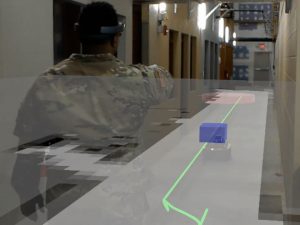 Human-robot teaming offers great potential because of the opportunities to combine strengths of heterogeneous agents. However, one of the critical challenges in realizing an effective human-robot team is efficient information exchange – both from the human to the robot as well as from the robot to the human.

In this work involves an augmented reality-enabled, gesture-based system that supports intuitive human-robot teaming through improved information exchange. Our system requires no external instrumentation aside from human-wearable devices and shows promise of real-world applicability for service-oriented missions.

We show how a set of glasses equipped with gaze tracker, a camera, and an Inertial Measurement Unit (IMU) can be used to (a) estimate the relative position of the human with respect to a quadrotor, and (b) decouple the gaze direction from the head orientation, which allows the human to spatially task (i.e., send new 3D navigation waypoints to) the robot in an uninstrumented environment. Featured in IEEE Spectrum.

This research focuses on using augmented reality to communicate metric and symbolic information between robotic and human teammates in unstructured, uninstrumented environments to improve team performance through shared understanding.

For this research I created an integrated human, autonomous planning system to explore space of surveillance solutions based on limited human interactions to maximize both quantitative task-performance and qualitative operator satisfaction.

This research involved the creation of an intelligent, autonomous robot instructor and a context-aware augmented reality system to teach students with intellectual disabilities life skills.

At GE Global Research, I constructed a cognition-based system to enhance the safety of humans in a surgical instrument
processing environment alongside robots.

I implemented intelligent sorting of surgical instruments on a Rethink Robotics Baxter Research Robot, and leveraged the perception, reasoning, and action capabilities of the robots in the system to detect humans, evaluate risk, and select appropriate actions to ensure the safety of human co-workers.

I used an approach for automated task solution synthesis that algorithmically and automatically identifies periods during which a team of less-than-fully capable robots benefit from tightly-coupled, coordinated, cooperative behavior.

I tested two hypotheses: 1) That a team’s performance can be increased by cooperating during certain specific periods of a mission and 2) That these periods can be identified automatically and algorithmically. I also demonstrated how identification of cooperative periods can be performed both off-line prior to the application and reactively during mission execution.

I validated these premises in a real-world experiment using a human-piloted Unmanned Aerial Vehicle (UAV) and an autonomous mobile robot. For this experiment I constructed a UAV and use an off-the-shelf robot. To identify the cooperative periods I used the ASyMTRe task solution synthesis system, and I used the Player robot server for control tasks such as navigation and path planning.

The goal of this DARPA project was to demonstrate large numbers (100+) of physical heterogeneous robots cooperating to solve indoor search applications. This project was a joint effort between Science Applications International Corporation (SAIC), The University of Tennessee, Telcordia Technologies, and the University of Southern California.

This project has developed and utilized a number of novel collaborative control algorithms to enable this robot team to explore an unknown building (one floor), find objects of interest, and “protect” the objects of interest over a 24-hour period, autonomously returning for battery recharging when necessary. All robot actions are highly autonomous and are monitored by a human operator using a sophisticated user interface at the building entrance.

The “protection” part of this project involved autonomously deploying a network of AmigoBots to the explored environment, and using that network to monitor for “intruders.” For this purpose, I constructed a distributed acoustic sensor network, using the simple microphones on the onboard computers of each AmigoBot, which constituted about ~70 of our robots.

The ultimate deliverable for this project was a live, week-long demonstration at Ft. A.P. Hill, officiated by the DARPA project sponsors, where the acoustic sensor network achieved 100% intruder detection without false positives.